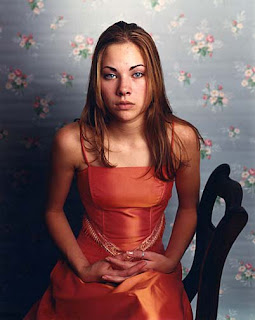 Try to imagine the soundtrack that might have been blasting from each girl’s car as she drove to Angela West’s portrait studio. Released in 2000, the year the Sweet Sixteen series began, Britney Spears’ anthem of quasi-coquettishness and adolescent bad girl behaviour, Oops…I Did it Again!, must certainly have played loudly.

I begin here because in many ways Spears may have, for each of the young women, served as something of a role model – a southern girl, from Mississippi rather than Dahlonega, Georgia, who had parlayed a combination of sweetness and sex appeal into a global brand. At least that is how one might envision it when first encountering West’s enigmatic Untitled Portrait #1, which is certainly the foundation of what follows.

The instructions were simple enough. West invited a group of young women from her hometown to be photographed in what each deemed to be formal attire. The scope and range of their choices is dramatic, but it is positioned by this first image. In it we encounter a young woman (cue here 2001’s Spears ‘classic’ I’m Not a Girl, Not Yet a Woman, which we will imagine is the soundtrack for the majority of the project) who seems to pose so far outside the scope of formal portraiture that one wonders where it might even fall on the scale of propriety.

But West approaches her subjects with both incredible focus and unbelievable restraint. Remarkably, she allowed her sitters to project their individuality. This results in the uneasiness of Untitled Portrait #1, where we encounter the model, arms back and chest thrust forward, midriff exposed, caught in something between a smile and a pout. What transpires is that viewers becomes caught in moments of unease, particularly because the blatant sexuality that she is portraying is at odds with cultural expectations of a sixteen year old girl. To the best of West’s recollection, she even brought her boyfriend to the sitting. “A lot of the girls did,” she remarked, “which I always thought was a little strange at first.”

Still, West had the courage of her convictions, allowing the girls to dress and present themselves as naturally as was possible. In many instances, her subjects lacked both the confidence and the understanding to engage more fully, leaving themselves to appear as little more than dress forms for personal fashion choices. Even the opportunity to put themselves more at ease met with mixed results, even though she allowed them, as West explains it, to “hang out” and listen to music during the shoot.

In viewing each of these images, I am reminded of what the late Craig Owens said in his essay Posing:

What is involved in this photograph, then – or, for that matter, in any photograph – is the figuration of a gaze which objectifies and masters, of course, but only by immobilizing its objects, turning them into stone.

What this means for West is that she has captured the essence of this undecideability, this ambiguity. By creating the conditions for difference – the individual – and repetition – her instructions, she has captured the fleeting idea of formality for these young women, in this specific place, at a particular point in time.

Owens continues, “What do I do when I pose for a photograph? I freeze – hence the masklike, often deathly expressions of so many photographic portraits.” Clearly, West’s preference for not directing her subjects left many with little idea of how to engage with the camera, with the resulting faces oscillating between the blank expression and the forced smile. Strangely, Untitled Portrait #9, with its subject leaning against the back of a wooden chair that is turned towards the viewer, becomes the most realistic, in part because the sitter actually understands what the expectations are for an image of this type. This is not to imply that it is any more real than the others, but merely that she captures, in her slightly upturned lips, at least the impression of what a formal portrait might be. It becomes, one might think, the one a mother would be most likely to put on her wall.

While anything but deathlike, West’s portraits can be challenging. Consider, for instance, Anna at her Shower, in which we encounter a seemingly young girl, obviously expecting, seated on the grass. Her age seems undefinable, yet the image is unambiguous. In it, viewers become complicit in an experience that is, as with the Sweet Sixteen series, entirely unanticipated and entirely uncontrollable. Again, one encounters the uncertainty of age, coupled with ideas of acceptability.

This ambiguity is a central aspect of all of West’s works. Each image she creates, regardless of its series, is imbued with the possibility of an alternative interpretation. Time and again, architecture and space are depicted as undefined possibilities, both ominous and welcoming at precisely the same time. Look closely at Trashy Trees, in which a red clay road simply disappears into the overgrowth. Even more indeterminate is After School, an overgrown building defined by a strong horizontal element that marks the low roofline. “It actually is a photograph of a 1950s building where I went every day after school,” West told me. This evidence of architectural decay is endemic throughout the south, as nature slowly reclaims everything.

“Some things are better left unearthed,” West remarks casually, “although I love using different artistic conventions, especially portraiture and landscape, to rediscover something I thought was really familiar.” This experience of place is informed, in part, by the depictions of the south by writers such as Flannery O’Connor or Carson McCullers. West is intrigued by the idea that the seemingly familiar can suddenly become remarkably more complex, that the pursuit of memory, what we might term in keeping with both philosophy and psychoanalysis a “repetition” becomes an entirely different experience.

And what about the corsages? Collected during junior high and high school, and salvaged from a box marked “Dumb Flowers”, the mere fact of their existence maps West’s understanding of personal history and the construction of an identity. “It’s a little unusual,” West laughs, “to think that I was saving them and putting them down at the same time.” Their titles seem straightforward statements of fact: Eighth Grade Dance (May 1985); Junior Prom (May 1988). What they suggest is the ongoing processes of change and maturation that, in a sense, were revisited by the Sweet Sixteen series. For what West has done with the two is alter the perspective from the personal to the universal. Whereas the corsages stand as signifiers of personal growth and individual experience, the Sweet Sixteens stand as the vessels for the shared experiences. It is almost as if West is gently reminding each of her sitters that they too will likely have these evenings, receive these traditional gifts, and treat them in a similar way.

What is striking is that the corsages are beautiful, but in actuality the flowers are long dead. I would suggest that she has treated them with a tenderness, even a romanticism, that even she would not have expected. It is as if the idea of the corsage is even more important than the depicted object itself. “I wanted to think about them from a much later time in my life,” she observes, “and to see the futility of the idea, but the hope nevertheless.”

In many senses, it is hope that positions the majority of West’s works. In Jewell, we encounter a woman lying on a shag carpet, in her pajamas, stretching her leg. It stands as a bookend to Anna at her Shower, in many ways suggesting the mundane aspects of everyday life. While we might look at Anna at her Shower with some sense of trepidation, we can certainly view Jewell with more than resignation. It would be all to easy to pigeonhole West as a cynical photographer, making fun of southern childhoods from the safety and sophistication of a much larger city. Instead, she approaches her subjects from a position of understanding.

Turn, finally, to the fact that West makes her imagery the “old fashioned” way, lugging an eight by ten view camera to location. “It totally changes the dynamic,” she explains, “since it is almost as if you are pinning your subjects down.” In an age in which many photographers rely on the ability to take multiple images of a single subject, with the hope that one will achieve their desired result, West works in a more measured fashion. “It would be very different if I were to use another camera,” she explains.

In the end, these works stand as three approaches to the idea of personal identity. One, the Corsages, stands as documentation of a life lived. The second, the Sweet Sixteen series, becomes an opportunity for shared experience. The remainder, images drawn from her landscape works, as well as the series’ Little Deaths and My 33rd Spring, becomes convergent maps of where this all may have occurred. Individually, it is as if each work has a content positioned partly by disquiet and unease. Collectively, they begin to tell an individual story, and to speak the voice it is necessary to have if one wants to share. I am reminded of The Heart is a Lonely Hunter, by the incomparable southern writer Carson McCullers:

This summer was different from any other time Mick could remember. Nothing much happened that she could describe to herself in thoughts or in words – but there was a feeling of change.

It is here that one finds this feeling of change. Here, in the works of Angela West, that move from the personal to the universal, yet all the while seem somehow to stay in precisely the same place.

Image used by permission of the artist and Jackson Fine Art, Atlanta.
Posted by Brett at 11:17 AM

Shutters come in many different forms including Cafe style shutters (which cover the lower half of the window), tier-on-tier shutters (two separate layer of shutters), full height (covering the whole window), and shaped shutters (to fit difficult, or unusual windows).