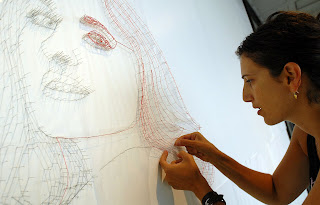 1. Melissa Dadourian: This Brooklyn based artist’s large scale installations recontextualize our understandings of the representations of women. Made painstakingly, laboriously, and seemingly effortlessly, her works expand our understandings, both intellectually and physically, of what it means for women to represent women in the present age.

2. Bentzon Brotherhood, Rapper’s Delight: Take a stone rap classic by the Sugarhill Gang and break it down with incredible jazz piano. My favorite new purchase from Turntable Lab, it shows that just when you thought classic meant cliché something like this comes along and stands your expectations on their heads. Great for DJ sets, and I’m pretty sure it’s a floorfiller.

3. Zhang Huan, Pace Wildenstein, May 2008: Take the fantastic Pace spaces in Chelsea and fill them with works of wonder. Zhang Huan’s works seemed unexpected and unbelievable, subtle and base in precisely the same moment. Let the intricacy of the works in Blessing be almost overshadowed as you walk across the seemingly precarious elevated walkway and gaze down on the ash that is making up Canal Building in its 19 by 59 foot glory. The materials themselves seemed to be solid, the ash standing as a huge block of concrete with a delicate drawing overlaid.

4. Ricky Gervais: Apart from creating The Office, he was also the creative genius behind Extras, that short-lived series on HBO about the journey from nobody to somebody and back again. Leads to the rather more surreal scene of him humorously cajoling Steve Carrell for the Emmy he’d won the previous year. With US network television seemingly struggling, and many suggesting that even cable has lost its luster, Gervais’ heartwrenching and humorous forays into the flabby Everyman seem even more sublime.

5. The Getty, Los Angeles, Summer 2008: When you can walk into a gallery and have a Bill Viola video work juxtaposed with relevant historical painting, you know someone’s been applying their critique of institutions theory. When you continue through the same building to experience Nicole Cohen’s site specific, period-inspired genius, you understand curatorial practice. In almost every respect the Getty shows unexpected restraint. And when you ride the tram down to the parking lot, you can marvel at the mid-century modern neighborhood nestled across the freeway. Unanticipated architectural context anyone?
Posted by Brett at 7:16 AM