Classic of the Week: On the Museum's Ruins 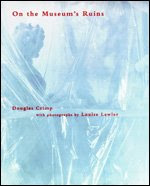 When I began doing graduate studies in the arts, I became entranced by what you might term the “October” group: Douglas Crimp; Rosalind Krauss; Benjamin H. D. Buchloh; Yve-Alain Bois; Joan Copjec. I devoured any book that made its way to my far-away destination, whether in my university’s library or at the two competing bookstores that were across the street from each other in Sydney, Australia.

One of my most significant early puchases was Douglas Crimp’s compilation “On the Museum’s Ruins.” I of course hadn’t seen his seminal Pictures exhibition, and, for whatever reason, the essay wasn’t actually included in the book. Instead, essays such as “The Art of Exhibition”, “On the Museum’s Ruins,” and others formed the early basis of my critical and theoretical thinking about the visual arts.

It is a book I have referred students to often in my professional life. The ideas that Crimp considered regarding originality, appropriation, sex and gender, the critique of institutions, and related topics all find an intelligently reasoned foundation within this work.

It should be regarded as a classic, and for that reason I deem it to be the inaugural Classic of the Week. Read it.
Posted by Brett at 8:36 AM