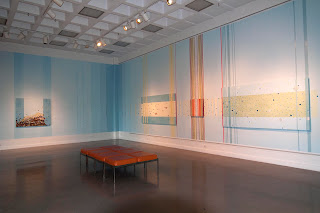 For all bodies are in a perpetual flux like rivers, and parts enter them and leave them continually.

For the moment, we’ll simply call Jürgen Tarrasch a landscape painter. This is of course an oversimplification and, on some level, it might not even be true. But I begin here because I want the opportunity to engage with the works in Artifacts on an experiential level before I even begin to contemplate what they might mean.

This method of approaching art is something of an anomaly. And, in many instances, this will certainly be the case. But here I believe that taking the time to engage with the works on a purely visual level, to interact with the series, and to move through the installation without a predetermined narrative, will lead to a more subtle, more contemplative, and more unexpected experience.

Of course, Tarrasch actually refers to himself as an organic abstractionist. This might provide one with a framework for categorizing the pieces, but it might also provide little guidance in understanding what they mean. This is significant because Artifacts is something more than a series of disparate pieces. It is rather a large-scale, site-specific, painterly installation. In moving within and through the piece, one finds oneself both within and without the work at precisely the same time. In the front gallery, it is almost as if we are able to detach and disengage, while in the back gallery it is as if we are being enveloped, literally swallowed by the work itself, or more accurately being consumed by its gaze.

Artifacts may be considered as a suite of interrelated pieces. Consider, for example, The Spill, a series of three works suggesting the unexpected power of nature. Each slowly expands within the space at the same time that its densely packed elements are dispersed across the canvas. This idea of the fragmentary nature of experience reflects Tarrasch’s philosophical observations on the nature of the physical world, or, perhaps better, the physics of the natural one.

Drawing on a long line of philosophical precedents, including Immanuel Kant, Baruch Spinoza, and most specifically Gottfried Liebniz, Tarrasch’s approach involves a complex process of depicting the ways in which forms become matter, and matter depicts form. “How can I define my observations of nature,” Tarrasch wondered, “and how can I define these theories on canvas?”

What resulted is an installation in which Tarrasch explores both the rooms outside, and the rooms in his mind. Both The Spill and Relieve depict sequential observations of the external world. In Rising we experience the observation of a space that has depth at the same time that it is flat, and has color at the same time it is monochromatic. Tarrasch describes Rising, a particularly complex and subtle work, in what seem to be the simplest of terms. “I was riding over the hills near my house, and I was struck by the ways the light and the mist were simply hanging in the hills.” Without this context, this work could depict almost anything, but here it stands as a signifier for something that is happening just outside your window.

In moving between gallery spaces, one transitions from the observed to the remembered world. Here, Tarrasch has transformed the space entirely. Works expand beyond their formal boundaries, creating shifting perspectives, unexpected relationships, and opportunities for closer and closer observation. Each work is a discrete object but, at the same time, its pattern and repetition extend beyond the edges of the surface. In expanding, each piece fragments, with discernible elements appearing subtly within, between and beyond each work.

It is here that Tarrasch’s philosophical analyses of the processes of memory become most evident. As Gottfried Leibniz postulated, Tarrasch considers the actions of memory to be both physical and physiological. It is as if the processes of neurotransmission have poured out of his thinking and onto the walls.

“The flow of thoughts, much like the flow of nature, can be beautiful,” Tarrasch remarks. “They can be straight, or patterned, or random.” In The View (Leaves),we encounter an unexpected geometry. Tarrasch’s leaves are square, simple placeholders for any thing, any thought the viewer might want to put in their place.

At times, Tarrasch makes this idea of materiality even more manifest. In one of the works from the series Stream, nuts that form an organically irregular pattern on the work’s surface expand to float away on the wall itself. They appear again, contained within smaller, discrete groups in Random, immediately adjacent to Stream. That Tarrasch would choose to break from the perceptual depth of the pictorial field within this space simply serves to reinforce his beliefs that patterns of thought can be both arbitrary and random. Had this rupture of nature occurred in the front gallery, it might have been entirely expected. Here, within the confines of the represented mind, is completely the opposite.

Tarrasch also explores the implications of place, of a site’s specific geography, and the unexpected objects and symbols that emerge. In Vines, Tarrasch represents, however abstractly, a ubiquitous invader, a foreigner, an “Other.” “I may not have been able to have painted a series about vines while living in Germany,” he observes. “Sometimes, although you may see a negative in nature, something like kudzu, an introduced vine, for example, it creates the opportunity for you to see something positive within your works.” Tarrasch strives to represent the power of nature, using observation and representation to find and define the colors, but more importantly, their clarity. He also uses specific methods to rupture our passage through his pictorial space. The shimmer and luster of his fresco technique creates unexpected moments of additional light, of reflection, of flicker, and of movement.

“I hope,” Tarrasch remarks, “that viewers will have a type of shared experience when they view this project. I want their thoughts to flow, to build, to climb up, to become a stream of thoughts that transition from and between each work.”

In the end, Tarrasch’s approach is one that leaves a great space within which viewers can insert themselves. Just as The Spill creates a space that moves visually from just open, pushing viewers further and further into the works, Relieve uses exactly the same approach to gently ease viewers out of the space. From The Spill’s dense shades of vibrant blue through the color and variation of The View (Leaves), Stream, and The Vines, we finally arrive back near the beginning, but in an entirely different place. Here, in Relieve’s spring palette, we are thrust forth out of the space and directly into the natural world.

Before leaving, we might turn to consider Rising again. Its flatness opens to reveal deeper and deeper layers of depth, its monochrome both absorbs and reflects its subtleties over and over again, revealing more and more colors - although we know that they are exactly the same. Our perceptions are struggling here, trying to handle the complexity, trying to understand the movement, our thoughts both ahead and behind themselves in precisely the same instant.

Artifacts refers to the fragments that are left behind, to the flashes on both our retinas and our memories. It is a challenging and complex work, beautiful in its simplicity.

One might think here of an observation Tarrasch made when speaking about the perceptions the work might receive: “I don’t want to complicate the situation.” Perhaps not. Instead, he is content to lead viewers through both the rooms outside and the rooms in his mind.
Posted by Brett at 9:17 AM