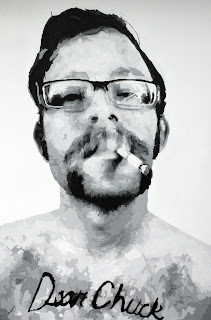 When John Fields first told me about “Dear Chuck: A Love Letter in Five Parts,” I wasn’t sure what to think. I thought it was a joke…maybe.

I think the issue, the challenge, the question, was where to situate these works. Obviously, these five paintings can’t be a joke, because no one would expend so much effort on making a one-liner. And no gallery would exhibit something without significant artistic merit. But where can we site these pieces? Are they homage? Are they appropriation? Are they something else entirely?

I begin here because the simple fact of the matter is that I’m not sure where these works reside. Perhaps one of their closest ancestors would be Andy Warhol’s works based on the writings of Truman Capote, fifteen pieces Warhol exhibited at the Hugo Gallery in 1952. Or maybe it’s just that Fields considers Chuck Close to be an enigma, a cipher, an icon, an artist whose works are so emblematic yet so ubiquitous that it is difficult to determine where the affection, or maybe the affectation, begins and ends.

Stylistically these works are more complexly detailed than those in his most recent previous exhibition. He has expanded his range of blacks and greys from ten to roughly thirty, creating more tones, more subtleties and more variations. The scale, which borders on immense, is both enticing and repellent at precisely the same time. Somehow, the flatness of the images and the distillation of tones into simple blacks, whites and greys gives the works as much in common with death masks and other face coverings as they have with Close’s most restrained palettes. Obviously, the lack of color simply serves to shift the focus to the ‘love letter’ itself, which, when read in its entirety says:

Lovers of pap popular movies will of course snicker at the Jerry Maguire reference, but here it is something else entirely. Here Fields is suggesting that Close’s deconstruction of the practice of portraiture into its discrete elements – into a series of tones, delineated by a grid, and arrayed across a canvas – gives Fields a freedom that he never expected as a painter. It is as if Close himself has given the finger to the whole practice of academic painting, and this is the reason that Fields loves him. What Close did, and the lineage Fields wishes to continue, is one in which the discourse of painting doesn’t revolve around outdated or outmoded ideas of perspective or representation. Instead, in the lineage of what we might even term the flatliners, Close, Warhol and Alex Katz, Fields is able to lay it all on the surface. That’s something worth loving anyone for.

So the true subtlety lies in the shift from the idea of love for a person to love of the creative practice that they represent. It is as if Fields is writing an artistic ‘thank you’ note, one in which his ongoing reiteration of the mantra thank you, thank you, thank you is evidenced by the layers and layers of pigment that he brushes across the canvas he is painting upon.

I think it is a great challenge for viewers of Dear Chuck to make this distinction. It would be altogether simpler to try to lump Dear Chuck into the pastiche of post-postmodern works that refer to something that becomes a commentary on an appropriation of an appropriation.

I don’t believe this is the case here. For in Dear Chuck, Fields asserts himself as the author by his appearance in the initial image, practically mirroring Close’s Big Self-Portrait (1967-1968) that is in the collection of the Walker Art Center. In Fields’ painting the cigarette is on the other side, flipped reversed, we could even call it mirrored. He, like Close, is staring out at the audience, smoking a cigarette, après le diner, après sex, après something.

Of course the other challenge is to consider how Fields, like Close, uses his friends in the images. In 1970, Close remarked, “I don’t want the viewer to see the head of Castro and think he has understood my work.” Fields doesn’t want the viewer to think this either. He wants the viewer to question just what the love letter is actually ‘telling’ Chuck Close.

Maybe the fact is that these five paintings don’t tell him anything, that they exist outside the realm of his experience, and Fields understands that - just like we always understood that most fan letters aren’t really answered by the stars. So when we look at the works we get drawn into the deception. It’s almost like a secret, and we know something that Chuck Close doesn’t.

All five portraits reflect this theme, with text scrawled across the apparently shirtless chests of Fields’ male and female subjects. It is as if he is inscribing his appreciation on himself, and others, because there isn’t a way to represent its internalization and actually still see it. All five stare blankly into the lens, Chuck Close style, as if the indifference or lack of emotion somehow had the capacity to remove the intimacy of the process. Remember, this is a love letter in five parts. Yet ever ironically, Fields makes the ‘letter’ a pastiche of clichés, icons, something that borders on the emotions he might be feeling if we were able to believe him. I think the more complex dynamic is between Fields and his sitters rather than between the artist and his desired audience.

Strangest of all, I believe that everyone who appears in these paintings probably does ‘love’ Chuck Close, and I believe that the artist loves him the most of all. But I imagine Chuck Close, in his studio, trying to formulate a response. I imagine he writes, “Dear John: You adore me. Love, Chuck. XOXO. PS – it’s almost the sincerest form of flattery.” And then he tries to title the work. “Dear John: A Love Letter in One Part.”
Posted by Brett at 1:27 PM