The Simplicity of Multiplicity 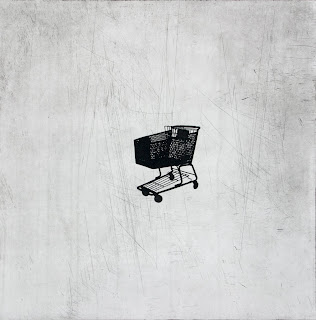 Printmaking’s complexity, as well as its simplicity, lies is its multiplicity. The capacity for seriality and repetition places printmaking in a class of artistic practices that sits uneasily within the fine arts precisely because of this capacity. The idea of repetition being an anathema to fine arts is as common a statement as is Walter Benjamin’s observations on the aura, authenticity and originality.

I begin here because the two exhibitions that form the season of Currency are framed not by this idea, but instead by a framework that is both far simpler, and perhaps more complex at the same time.

Currency Part 1: Modes of Expression is, in many ways, a very traditional exhibition. It contains the largest collection of contemporary print works made with traditional media that has ever been exhibited at Artlab. And, in many ways, this observation was initially an impediment. My reservations stemmed in part from my own inability to critically position printmaking as a contemporary discursive practice, a reservation that was dispelled by my conversations with professor and printmaker Derek Cracco. My reticence was exacerbated by what I perceived as printmaking’s emphasis on technique – something that while not unimportant, was not and still is not my primary criterion for evaluating a work of art. Here is a contemporary dilemma, one in which I perceived that the value of a work could not be derived from its medium or methodology, but was instead wholly dependent on its concept.

I believe this belief, which I acknowledge can border on a prejudice, stems in part from the historicity that accompanies so much printmaking today. It is difficult, for example, not to consider the practices of printmaking as falling somehow outside the fine arts realm. Consider, for example, an exhibition from the early 1990s that appeared in London, Philadelphia, and Canberra, Australia. It’s title? Lasting Impressions: Lithography as Art. The title implies, by necessity, that maybe lithography (and by extension every other print medium), might somehow not really be art – it might be a commercial practice, or a practice so trapped in its industrial/commercial applications that whatever it was it would never scale the heights of the true fine arts – painting, sculpture and architecture, of course.

We know, of course, that this is not the case. We accept that the print medium has not only expanded our experiences of art, but that it has also opened its market. We see the screenprints of Andy Warhol, the transfer prints of Roy Lichtenstein, and the etchings of Kiki Smith as works that assert the primacy and the possibility of modern and contemporary printmaking.

I begin here because it is from this framework that Currency Part 1: Modes of Expression was conceived. When Derek Cracco first posited the idea, it was framed in the ways I have outlined above. I believed that there was duplicity in the concept much as there was duplicity in the idea of printmaking itself. It seems self-evident that the very process of printmaking, the creation of a copy without an original, creates something that is unique and universal in precisely the same instant.

What follows, then, is an exhibition that explores the notion that printmaking stands as a trope for the contemporary creative practice. One could read the media themselves as being subject to a single question, which became “What does it mean to express an idea through the practice of a printmaking medium today?” What is, and what do we mean, when we speak of its mode of expression?

The six artists in Currency Part 1: Modes of Expression, each have an individual approach to a medium and a methodology. Five of the six artists are represented through their emphasis on abstraction, while the sixth explores a terrain somewhere outside pure abstraction itself.

Consider, initially, the three works by Polly Apfelbaum. Each is a lithograph, a work made possible by the natural opposition of oil and water and the capacity this creates for binding ink to a plate. Apfelbaum’s iconography is both simple and familiar. She began drawing and printing flowers almost twenty years ago, initially by simply sketching some of Warhol’s flowers. This unexpected appropriation stands as indicative of printmaking itself. Apfelbaum subtly appropriated and altered one of history’s grand appropriators, recontextualizing the imagery to be delicate and intimate. The flower, as a flat block of unified color, stands as a symbol for nature far more than it actually represents nature itself. Rainbow Love, Mountain Ranch, New Mexico is a twelve-color lithograph that arrays itself vertically in terms of color but horizontally iconographically. Her flower theme, a consistent element in her works for over twenty years, provides a constant yet ever changing element that can serve to unify her works. In When Opposites Attract we see two approaches to the monochrome representation of a unified subject. On the left, we see what we might regard as the gesture, while on the right we find her marks reduced to the flat blocks of color that appear in other works. These latter icons are, in a sense, more indicative of the modernity of printmaking, while the former refer to its history.

Artist Laura Berman’s works from both her Gridrocks and her Rockpiles series consider the relationships between the form and pattern of nature and the essential flatness of printmaking. Writing on the Gridrocks, a series of relief monoprints, Berman has observed that the works are inspired by both the permanence and whimsy that cohabitate in her rock collection. Formally, the pieces are ambiguous, a series of organically shaped, multicolored shapes arrayed across a sheet of paper. Berman’s monoprints are the only ones in the exhibition. Perhaps the single most challenging element of these pieces is that in representing the rocks Berman’s reductions make their lineages more hidden. The idea of the rock as a subject creates an automatic dichotomy, one between the beauty of nature (where the rock signifies both groundedness and permanence), and the shortsightedness of the narrow minded (in which someone might be ‘dumb as a box of rocks’).

Carl Fudge’s screenprints combine aspects of historical art, contemporary technology, and traditional printmaking techniques to create works that refuse to be historicist while at the same time being historical. The significance of these works lies not in our capacity to recognize their source material, as it is not about whether or not we can locate the pieces comfortably. Instead, Fudge’s transformation of the source material into a series of pieces, which are represented by variables –x, y and z –, means that the works themselves become both singular and universal. Our expectation, or even Fudge’s assertion that the pieces actually have a historical framework hinges on our complicity in believing this to be the case. What is most challenging, and therefore most unexpected, is that screenprinting has so often been used as a medium of pop and post-pop reduction, something suited for both Warholian excess and garage band success.

More unexpectedly, Fudge’s nomenclature creates a kind of expectation that the works themselves have identifiable sources. A brief search suggests antecedents might be Lazlo Moholy-Nagy’s Komposition Z, or although seemingly less likely, Wassily Kandinsky’s Komposition X. Fudge’s abstractions become complex studies in pattern and repetition, multilayered works that obscure their primary sources and become something more than pure abstraction at the same time.

Kevin Haas’ Inventory series shares much with Klingberg’s Brand New View. The most representative of the works in the exhibition, Haas has still distilled his iconography to its simplest elements. The black silhouettes highlight the unexpected subtleties of design, and the works represent objects that are traditionally found at human scale. Haas’ focus on traditional printmaking techniques highlights the absolute banality of the subjects themselves. The works, intaglios on paper, capture subjects that would not seem to merit such complex treatments. In this disparity, Haas distills one of the focus areas of contemporary printmaking to its simplest elements. Whereas historically printmaking allowed members of a social structure to assert status and power, contemporary printmakers use complex techniques to represent quotidian objects. For Currency Part 1, Haas’ nine-piece grid of objects from the everyday world almost creates a taxonomy of the overlooked. Like Klingberg, the capacity of the banal becomes the celebration of unexpected beauty.

At first, both the beauty and the seemingly obsessive qualities of creation inherent in Karla Hackenmiller’s works are not necessarily apparent. Liminal Collision, an etching and spit bite aquatint, is a delicate abstraction with threads etched across the plate. The Liminal Slices combine etching and collage, adding an unexpected texture to our expectations of the print. This unexpectedness is represented through the collision and passage of information across the ground, much as the way in which the idea of the liminal and liminality address the space one inhabits between two states – between conscious and unconscious, or between asleep and awake. Hackenmiller uses traditional methods to represent universal experiences that are more often illustrated through the moving image.

Gunilla Klingberg’s Brand New View is the least traditional print work in Currency Part 1, at least to the extent that it lacks a traditional ground. Her large-scale, site-specific works turn mundane corporate identities and well-known corporate brands into large-scale rosettes or mandalas, icons for a new view of the corporate age. For Brand New View, she hybridizes American and international corporations, familiar brands like Wal-Mart or Target. The former’s oft-overlooked star becomes a repetitive signifier of success and glamour, while the latter’s ubiquitous target icon serves to create dynamism and movement. Kmart’s oversized K becomes transformed into something suggesting the Indian subcontinent, while the Northeastern supermarket chain Shoprite makes an appearance with its former logo, still in use at some locations. Klingberg’s installation makes the banal become beautiful, as the texts and embellishments become transformed into patterns suggestive of a higher value. One need only walk a short distance to the stained glass rosette window on the UAB campus to see an antecedent that is both transformed and skewered by Klingberg’s repurposing of such iconic logos. The vinyl serves to stand as one of the most contemporary approaches to printmaking. Its capacity for boundless design and endless identical representation means that it shares the process of printmaking at least as closely as it strays from printmaking’s traditional media.

For now, Currency Part 1: Modes of Expression serves as a tentative step towards reconsidering and recontextualizing contemporary printmaking. It seeks to work at the edges, to question the roles of traditional media as mark making methods in the modern world. Obviously each artist is committed to the potentials that traditional mark making provides in the printmaking context. But rather than be constrained by media, these artists take control of both the media and their histories to assert new ways of using well-understood tools.

Perhaps each of these artists explores a duality that might not have readily been apparent. Fudge and Klingberg explore the intersections of technology and tradition. Berman and Apfelbaum sit on the edges of nature and process. Kevin Haas uses the contemporary world as a means of abstraction, and printmaking as its method. And Karla Hackenmiller allows the spaces of transition, the liminal spaces, to be both reflected upon and represented through both her process and content.

Clearly contemporary printmaking allows us to process this ongoing process, that of thinking historically without historicizing it. Printmaking may be the most ubiquitous artform we encounter each day. Perhaps it is more pervasive than photography. In any event, it is time to rescue it from its consignment to history, and to understand that tradition and traditional are not the same thing. Instead, printmaking has a currency as a mode of expression that is defining our understandings of the world and its expression today.
Posted by Brett at 9:21 AM