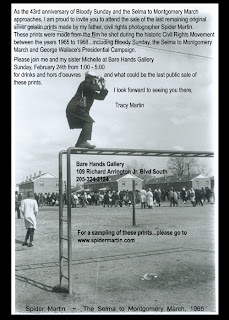 On Sunday, February 24th, Bare Hands Gallery will present a sale of what may well be the last vintage prints made by James "Spider" Martin during his lifetime. An iconic photographer, his images of Bloody Sunday and the Selma to Montgomery march are some of the most significant photographs taken during a time of upheaval and change. Martin, who was the subject of an exhibition entitled "Spider Martin's Unseen Sixties" last year at UAB's Visual Arts Gallery, is best known for the images of the civil rights movement.

It is evident that he had the courage of his convictions and found himself in what was both the right and the wrong place at precisely the same time. Now, historians and collectors have an opportunity to view and acquire one or more of his vintage silver gelatin prints.

It is clear that a picture is worth far more than a thousand words, but as I said some years ago, hardly anyone ever speaks them.

In July of last year I wrote an essay that explored the significance of Martin's other imagery, particularly his focus on 1960s fashion.

This is what makes the images in Spider Martin’s Unseen Sixties so complex. From the outset, we encounter an artist, an award-winning documentary photographer, who is both skilled and intelligent enough to understand that the medium, photography, is only as much of a limitation as an individual allows it to be. I begin here because, for most people familiar with James “Spider” Martin’s works, their acquaintance comes from his classic images of the Selma to Montgomery March, of Bloody Sunday, and of his documentation of the Civil Rights Movement.

These are important images indeed. And what one encounters from them, and what is evident beyond them, is that it is with an artist’s eye that Martin approached the technical aspects of photography. Composition, framing, contrast, exposure – all terms that one uses to describe the ability to create a quality image. Yet the subtleties of photography stem far less from the technical skills than from the personal abilities – timing, observation, understanding, and trust.

So when a curator, or in this case two curators – myself and co-curator Mindi Shapiro, who had both the original idea that these works might exist and the initiative to contact Tracy Martin about them - approach a photographer’s body of work, the images themselves are often familiar to the viewing public. These viewers, then, have specific expectations about what should be shown, what subject matters are appropriate or relevant, and how new approaches to an artists materials might be conveyed.

It is almost against these expectations that the current exhibition plays. For the images presented are not about struggle, but are instead about the complex questions of commodities, of desire, and of professionalism.

Spider Martin’s Unseen Sixties captures a unique moment in the history of Birmingham specifically, and Alabama generally. For against the background of complexity, Spider Martin found a creative outlet through the provision of professional photography services to a range of advertising agencies, magazines, and manufacturers as diverse as McCall’s, Women’s Wear Daily, and Minolta and, more locally, and for our purposes perhaps more significantly, Birmingham Magazine and Avondale Mills.

What is so unexpected about the images in the exhibition is the creativity Martin applies to his advertising work. Given an almost unprecedented range of artistic freedom, and supported wholeheartedly by the visionary editor of Birmingham Magazine, Donald Brown, Martin created what can only be termed tableau vivant for the pages of a magazine purportedly mostly concerned with promoting the Birmingham business community.

Donald Brown summed it up succinctly, when he wrote, “making the pictures, or at least tagging along with Spider for some of them, was an education itself.” He continued, describing a particularly adventurous and highly theatrical setup:

The night we were in the alley taking the black leather coat picture I thought either the rats would attack us or the police would arrest us for we attracted the stares of several passersby with our victim, his rifle and Charlane’s German Luger.

The image, which appears in the August 1967 issue of Birmingham shows a blonde woman, gun in hand, with her right leg stepping gently on a man lying presumably dead beneath her. What most characterized the images was Martin’s theatricality. Less ornate than the backdrops and scenes created by legendary Vogue photographer Cecil Beaton, Martin captured the moment of the sixties precisely, in a suite of images that mixed danger, excitement, and glamour over the course of eight pages.

This combination positions the exhibition precisely. Particularly startling are the images taken for Avondale Mills, one of Martin’s major clients. What is apparent is that manufacturers were knowledgeable of the marketability of allure. We encounter, for example, an incredible image of Birmingham model Lynn Spottswood in a lime green mini dress and legs that appear to go on forever. Martin’s image mixes the sophistication of haute couture with the sensuality of the times.

At the opposite end of the spectrum, he was also aware of the power of desire, and, at times, he captured this as well. One might consider here an image of a woman in a black bikini and black knee high boots. It would not be unexpected were it not for the addition of a gold multi-strand belly-chain, presumably a belt, and the large bull skull the model is holding up in front of her face. What surfaces again and again is his ability to merge images that have a charged content with the seemingly direct depiction of fashion. This duplicity reveals itself again and again, as in the image of a young woman sitting in an antique chair, in the woods, holding a rose. It is an image that is slightly unsettling, yet her engagement with the lens makes it compelling. And time and again Martin exploited this basic human response which, more often than not, compelled his viewers, sitting within the comforts of home, looking at a magazine or an advertisement, to study his imagery for a long time, trying to figure out just what it was that seemed so unexpected.

I am reminded here of the image of one of his models, standing on a pier, wearing white trousers and a blue top. There is a small spot on her forehead just below her scarf. The usual expectation, given the time, would have been that it was a bindi, the small adornment often worn by Indian women. However, it is not. Instead, it is a gold star that looks surprisingly like the ones children receive when they have done something good. Taken out of context, and totally unexpected, the star becomes a great fashion accessory. It is almost imperceptible, and I wonder whether it was always part of the shoot, or it was one of Martin’s unexpected and incredibly effective additions.

One of the most intriguing aspects of Martin’s imagery is his ability to transform his favorite models from one shoot to another. In the exhibition there are three images of Brenda Martin, his first wife. In one, which seems the most surreal, she stands in the woods (or maybe his own back yard) in a striped mini dress and a pair of white boots. The juxtaposition of fashion and nature, coupled with her exaggerated pose, makes the image incredibly tense. In another, we see her standing ankle deep in what appears to be a swamp or a bayou, dressed far more casually, seemingly more southern. In the third, we find her in San Francisco, dressed in a white patterned three-quarter length coat, a paisley scarf, and Jackie O sunglasses. She has transformed from sultry to southern to sophisticated in the space of three images.

Clearly, Martin’s ability to capture moments quickly, learned in part, I am sure, from his experiences as a newspaper photographer, coupled with a high degree of technical skill and a love for his medium, resulted in fashion photography that is direct, effective, and enticing.

The idea of focusing on fashion may be an anathema to some. But Spider Martin’s fashion imagery was some of his most innovative and alluring work for its time, imbued with subtlety, sexiness, and skill. Perhaps Donald Brown, writing on Birmingham magazine’s second fashion issue, from 1968, can sum it up best:

Trying to stay out of Spider’s way were Sarah Teague, fashion editor of the Post-Herald, who helped us this year, another model, sixteen year old Ensley High School Junior Denise Price; and Denise’s mother. Dianne emerged from the bathroom wearing a white crocheted dress and a body stocking. Denise’s mother, whom I think was suspicious of us at first anyway, turned ashen. Spider turned off his spotlight, leaving the room black. Then he started flashing his stroboscope. His tape recorder played his favorite, Zorba the Greek, and Dianne danced on the black velvet.
Posted by Brett at 7:33 AM